Green energy advocate and carbon nation friend Tom Weis is riding 2,500 miles from Colorado to Washington, DC on a human-powered, electric-assist “rocket trike,” calling for a national goal of a 100% U.S. renewable electricity grid by 2020.

The ride and goal are backed by prominent environmental and business leaders demanding urgent action from Congress and the White House in response to a deteriorating global climate.

Sponsor Lester Brown, featured in carbon nation, President of Earth Policy Institute and author of Plan B 4.0, says the 100% by 2020 goal is “achievable,” citing precedents for such rapid economic conversions. “During World War II, America mobilized its resources at a stunning pace, leading the Allied Forces to victory in three-and- a-half short years,” he said. “We need a similar, American-led green energy mobilization today to save civilization.”

This day will be a huge success, and the empowering message of action and hope will ring loud and clear across the world!!!

In celebration of 10/10/10, and inspired by 350.org, we are pleased to present an exclusive clip from the film.  Check it out on CarbonNation.tv or YouTube or on the 350.org blog. 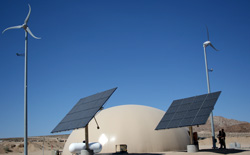 Monolithic Dome with wind mills and solar panels at Ft. Irwin Army Base - from Carbon Nation
The NY Times reports on the U.S. military's commitment to push forward with renewable energy installations instead of carbon based fuels. Carbon Nation celebrates these efforts in our film.

The crew is busy with travels, finishing up the final trailer and poster.

They just made an exclusive video for the 10/10/10 conference in Aspen.  Check it out

Please check back soon...updates are coming!!!