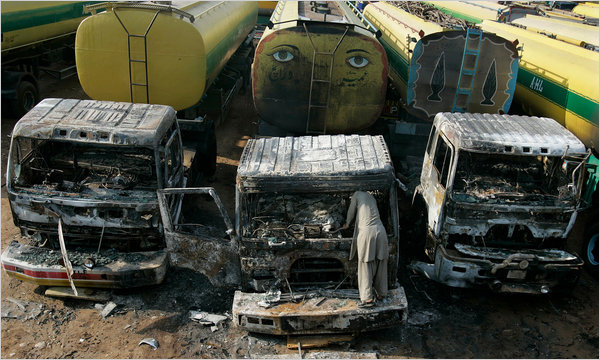 With insurgents increasingly attacking the American fuel supply convoys that lumber across the Khyber Pass into Afghanistan, the military is pushing aggressively to develop, test and deploy renewable energy to decrease its need to transport fossil fuels.

The 150 Marines of Company I, Third Battalion, Fifth Marines, will be the first to take renewable technology into a battle zone, where the new equipment will replace diesel and kerosene-based fuels that would ordinarily generate power to run their encampment.

Even as Congress has struggled unsuccessfully to pass an energy bill and many states have put renewable energy on hold because of the recession, the military this year has pushed rapidly forward. After a decade of waging wars in remote corners of the globe where fuel is not readily available, senior commanders have come to see overdependence on fossil fuel as a big liability, and renewable technologies — which have become more reliable and less expensive over the past few years — as providing a potential answer. These new types of renewable energy now account for only a small percentage of the power used by the armed forces, but military leaders plan to rapidly expand their use over the next decade.

In Iraq and Afghanistan, the huge truck convoys that haul fuel to bases have been sitting ducks for enemy fighters — in the latest attack, oil tankers carrying fuel for NATO troops in Afghanistan were set on fire in Rawalpindi, Pakistan, early Monday. In Iraq and Afghanistan, one Army study found, for every 24 fuel convoys that set out, one soldier or civilian engaged in fuel transport was killed. In the past three months, six Marines have been wounded guarding fuel runs in Afghanistan.

"There are a lot of profound reasons for doing this, but for us at the core it's practical," said Ray Mabus, the Navy secretary and a former ambassador to Saudi Arabia, who has said he wants 50 percent of the power for the Navy and Marines to come from renewable energy sources by 2020. That figure includes energy for bases as well as fuel for cars and ships.

"Fossil fuel is the No. 1 thing we import to Afghanistan," Mr. Mabus said, "and guarding that fuel is keeping the troops from doing what they were sent there to do, to fight or engage local people."

He and other experts also said that greater reliance on renewable energy improved national security, because fossil fuels often came from unstable regions and scarce supplies were a potential source of international conflict.

Fossil fuel accounts for 30 to 80 percent of the load in convoys into Afghanistan, bringing costs as well as risk. While the military buys gas for just over $1 a gallon, getting that gallon to some forward operating bases costs $400.

"We had a couple of tenuous supply lines across Pakistan that are costing us a heck of a lot, and they're very dangerous," said Gen. James T. Conway, the commandant of the Marine Corps.

Col. Robert Charette Jr., director of the Marine Corps Expeditionary Energy Office, said he was "cautiously optimistic" that Company I's equipment would prove reliable and durable enough for military use, and that other Marine companies would be adopting renewable technology in the coming months, although there would probably always be a need to import fuel for some purposes.

While setting national energy policy requires Congressional debates, military leaders can simply order the adoption of renewable energy. And the military has the buying power to create products and markets. That, in turn, may make renewable energy more practical and affordable for everyday uses, experts say.

Last year, the Navy introduced its first hybrid vessel, a Wasp class amphibious assault ship called the U.S.S. Makin Island, which at speeds under 10 knots runs on electricity rather than on fossil fuel, a shift resulting in greater efficiency that saved 900,000 gallons of fuel on its maiden voyage from Mississippi to San Diego, compared with a conventional ship its size, the Navy said.

The Air Force will have its entire fleet certified to fly on biofuels by 2011 and has already flown test flights using a 50-50 mix of plant-based biofuel and jet fuel; the Navy took its first delivery of fuel made from algae this summer. Biofuels can in theory be produced wherever the raw materials, like plants, are available, and could ultimately be made near battlefields.

Concerns about the military's dependence on fossil fuels in far-flung battlefields began in 2006 in Iraq, where Richard Zilmer, then a major general and the top American commander in western Iraq, sent an urgent cable to Washington suggesting that renewable technology could prevent loss of life. That request catalyzed new research, but the pressure for immediate results magnified as the military shifted its focus to Afghanistan, a country with little available native fossil fuel and scarce electricity outside cities.

Fuel destined for American troops in landlocked Afghanistan is shipped to Karachi, Pakistan, where it is loaded on convoys of 50 to 70 vehicles for transport to central bases. Smaller convoys branch out to the forward lines. The Marines' new goal is to make the more peripheral sites sustain themselves with the kind of renewable technology carried by Company I, since solar electricity can be generated right on the battlefield.

There are similar tactical advantages to using renewable fuel for planes and building hybrid ships. "Every time you cut a ship away from the need to visit an oiler — a fuel supply ship — you create an advantage," said Mr. Mabus, noting that the Navy had pioneered previous energy transformations in the United States, from sail power to coal power in the 19th century, as well as from coal to oil and oil to nuclear power in the 20th century.

The cost calculation is also favorable. The renewable technology that will power Company I costs about $50,000 to $70,000; a single diesel generator costs several thousand dollars. But when it costs hundreds of dollars to get each gallon of traditional fuel to base camps in Afghanistan, the investment is quickly defrayed.

Because the military has moved into renewable energy so rapidly, much of the technology currently being used is commercially available or has been adapted for the battlefield from readily available civilian models.

This spring, the military invited commercial manufacturers to demonstrate products that might be useful on the battlefield. A small number were selected for further testing. The goal was to see, for example, if cooling systems could handle the 120 degree temperatures often seen in current war zones or if embedded solar panels would make tents more visible to enemy radar.

This summer, renewable technologies proved capable of powering computers, residences and most equipment for more than a week at a test base in the Mojave Desert — though not enough to operate the most sophisticated surveillance systems.

Much more is in the testing stages: one experimental cooling system uses a pipe burrowed into the cool earth eight feet underground that vents into tents; a solar fan on the tent roof evacuates the hot air and draws cool air from underground. The Marines are exploring solar-powered water purification systems and looking into the possibility of building a small-scale, truck-based biofuel plant that could transform local crops — like illegal poppies — into fuel.

"If the Navy comes knocking, they will build it," Mr. Mabus said. "The price will come down and the infrastructure will be created."