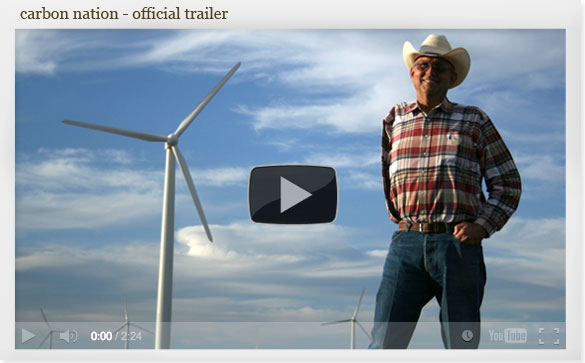 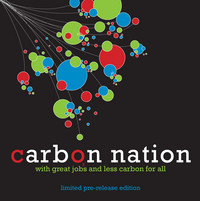 Military Green Hawks save lives and money by spraying desert tents with insulating foam. A Texas farmer creates a wind power commune, revitalizing his town. In California, parolees are trained to install solar panels in their community, and residents now sell power to the utility.

These stories are told in Peter Byck's new film, "Carbon Nation," which shows how people across America successfully move to a low carbon economy.

Inspired by Al Gore's "An Inconvenient Truth," Byck and his team spent three years traveling around the country, raising money as they went, finding creative energy and land use solutions that are good for the bottom line as well as the planet.

We spoke at Bloomberg world headquarters in New York.

Sadly, the thirteen-day smorgasbord of the 2010 Environmental Film Festival in the Nation's Capital came to an end this Sunday.

The festival ended with a bang: the world premiere of Carbon Nation, a film by Peter Byck and a (clearly) talented team. This film had its genesis at the premiere of An Inconvenient Truth, with Byck and his colleagues committing themselves to do a film looking for solutions to the challenges that Global Warming represents.

The 10-word review: Palatable, digestable look at the people who reduce carbon footprints.

"Carbon Nation," which opens at the Village 8 Theatres Friday, is a fast-paced, easy-to-grasp film that not only asks the questions Louisville filmmaker Peter Byck had about the environment and climate change, but also offers solutions from industry executives, Defense Department officials, environmental leaders and others.

Why carbon? Simply, the element's sheer abundance, coupled with its unique compound-creating abilities make it the building block of known life-forms.

Voiced by former CBS news reporter Bill Kurtis, the film spells out clearly that by changing some of our habits and routines, viewers can make a difference in changing climate.

Without resorting to scare tactics or an overload of statistics and factoids -- indeed, the filmmaker appears to have gone out of his way to not be a fear monger, hysterical or take the by-the-numbers approach -- "Carbon Nation" surveys ideas in use by alternative-energy providers, eco-entrepreneurs and energy-efficiency experts.

It's the interviews with the people making a difference -- from long-haul truckers to Army commanders, from CEOs to accidental environmentalists -- that drives home the film's underlying message: That even if you don't believe in climate change, even if the very thought of Al Gore causes your upper lip to curl, the economics, health benefits and plain ol' common sense of reducing carbon usage and its emissions cannot be denied.

Recommended if: You don't believe in climate change.

Not recommended if: You are not a carbon-based life-form.